The rain makes the slipway shine. Mike Carney shuffles down the slope, held on each side by his son Mike and his son-in-law Jerry.

“We felt it was time for him to go home,” says Mike junior, a 50-year-old detective, dressed in the same green raincoat. He has a sharp, lively face, like the faces of the Blasket islanders in old black and white photographs. Watching him must be like watching his father in his prime. “We asked my Dad to make a special trip even more special, by bringing us to his home.”

Still, it seems insane. The old man has to be lifted into the dinghy, although he climbs the metal ladder into the MV Blasket Princess on his own, the hands of the younger men guiding his feet. It is very cold, but the sea is mercifully calm during the hour it takes us to get around Slea Head, until the island looms, dark and forbidding.

Most of the homes are piles of grey stone, merging into the hillside. A few stand out as bright white, because they were renovated for a solicitor who used to own many of the plots. There was a cafe, and people camped on the island in the summer. It was lively, but those days are gone. The Office of Public Works owns most of the Great Blasket now and it is ghostly.

Three wild donkeys watch from above as our dinghy approaches the tiny harbour, their coats matted into dreadlocks. The slipway is jagged and ruptured, slick with seaweed and potentially deadly for a 92-year-old man. Somehow, though, he manages to get off the rubber boat and stand on the island. One foot down, then the other.

With his son almost cradling him from behind, Dr Mike finds the strength to shuffle up the slope as far as a grassy ledge where can sit, pale and breathless. “Oh my God. I never thought that I would be here today on this island where I was born. It’s amazing.”

Just a little further and he can see the ruins of the Carney house, with the stone that was placed outside after he was awarded his doctorate. “In memory of the people of the island, for their likes will not be here again,” it says, quoting Tomas O’Crohan.

Now the tears come. “The day I left my father said, ‘Mike, take good care of yourself, always look ahead. Whatever you say and whatever you do, make sure you did it right.”

His voice breaks. He wipes his face with a handkerchief. “So here we are. I hope I did it right.’”

Looking at his startled expression, I wonder for a moment if Dr Mike is going to collapse and die here, as his brother and so many of his relatives did over the years. But no.

We have to go. His strength is fading and the tide has turned. Slowly, in the arms of his son, the old islandman makes it back down the slipway. As the dinghy leaves the harbour, a seal pops its head out of the water as if to say goodbye. Usually Mike would make a lot of that, but this time he doesn’t notice. He’s weary, drained.

On the way back, I leave him be and talk to his son Mike junior, who admits they were asking a lot of the old man. “He’s tough. He’s an islander. They made these trips under very difficult conditions, in a canoe, when the seas were rougher than they are today. Yes, age was a factor, but we had God on our side.”

The tide has risen when we get to Ventry harbour and the Blasket Princess is able to come alongside the jetty, but Dr Mike still has to climb a ladder. When both his feet are on the jetty, a cheer goes up. His family are elated that the old man has achieved something that looked impossible. They are also, frankly, relieved that he is still alive,

We shake hands, to say goodbye. I notice he is trembling. Is it the cold? The exhaustion? He says simply, as a matter of fact, “I will never see you again.”

The skipper, Mick, calls out cheerily, “See you next year then.” But Dr Mike stops, grips his arm and stares right into his eyes. “I don’t think so,” he says. “Take care of the island, will you? It means a lot to me.” 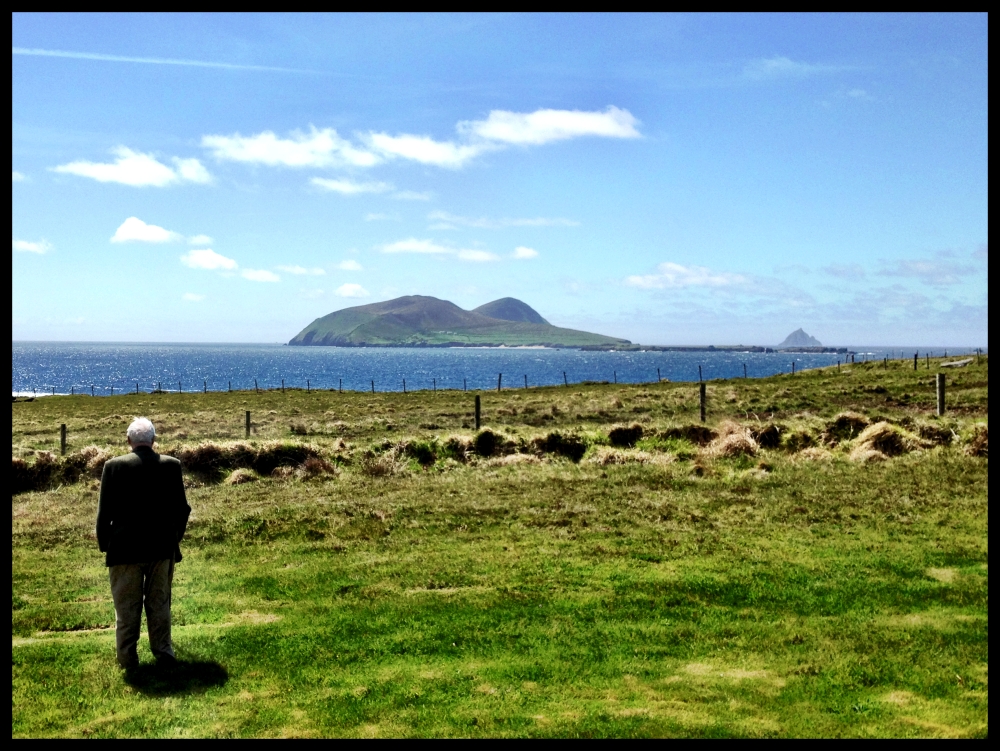 Watch the short film we made with the Telegraph when Mike went back to the island.